Mark Webber Set To Shake The Shadow Of Vettel In 2012?

With Melbourne a mere matter of weeks away, I would like to take a few moments to revisit the team responsible for the most noise last season, Red Bull. I turn my attentions, not to Sebastian Vettel but instead to the man, many hope, will break out from the suffocating shadow cast by his team mate in 2012.

Fundamentally there is nothing new that I can tell you about Seb, the statistics, performances and subsequent shower of accolades speak for themselves but I feel Mark Webber’s prospects can be further assessed.

I am a vocal supporter of Mark Webber, I always have been and always will be tucked up in his corner, fighting the masses. I can’t help it; I’m a sucker for the underdog. I would say he is one of the very few drivers who appears free to speak his mind and appear to the public in his natural form – i.e. not being spoon fed quotes. He will give honest feedback on his performance just as well as others and to be fair, will own up to driver errors on his part which in all honesty is something many others cannot attest. I hope his victory in Brazil, the last race of the season is a sign of fortunes to come.

I’ve heard the old ‘he’s in the same car as Vettel and cannot do what he does’ regurgitated countless times. Ok, it’s a valid point but I have seen some of the finest over takes and driver battles as a result of Webber’s poor qualifying and race mistakes. He is a fighter, clearly. As fast as Vettel – no but you would be a thief to take away credit from him given some of his track battles with Alonso have made for enthralling highlights in some otherwise uneventful races. Speaking of Alonso I find the relationship between him and Mark to be a curious one, in many a race last season we saw clean, fair, respectable track battles between the two drivers. Some have been known to criticise both drivers in the past for racing incidents and on occasion with good reason but in 2011 we were not privy to this  scenario with both showing that they have considerable trust in the others ability. This is a valuable asset which  allows them the freedom to take the gaps they may not ordinarily risk on others and in turn provide us with edge of your seat moments, the overtake made by Webber on Alonso into Eau Rouge was one such white knuckle moment. 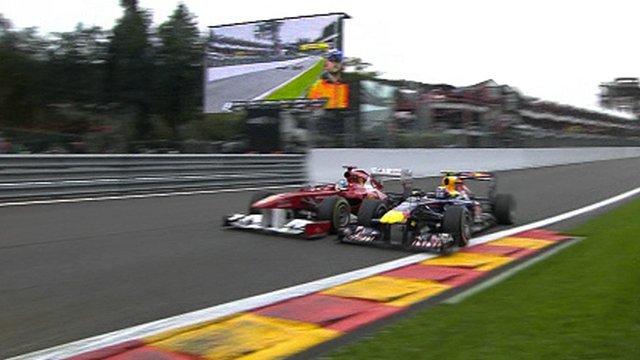 Mark has repeatedly opted to go against the grain on different strategies, more often than not the gamble has not given the best return but he is one of the few drivers that will take the punt and will never be defeated until he puts all four wheels over the finish line. A good example of this can be found if we cast our minds back to China. He came all that way up from eighteenth on the grid after he failed to get through the first session of qualifying to finish in third. He has repeatedly nursed his wounded beast into respectable podiums and point finishes.

Considering critics will slate his results as near to pitiful, let’s take a few moments to really assess Mark’s recent performances. He managed to finish up in third with 258 points, not too shabby considering he only won one race, this putting him ahead of respected rivals Hamilton and Alonso. He was only beaten by the uncompromising winning streak led by Seb and the magnificent exploits of Jenson Button, who I think it’s appropriate to note has also been fantastic this year. His duels have resonated with fans and I am under no doubt that he will certainly provide a challenge to Sebastian in 2012.

Of the 650 points Red Bull cavorted, Webber collected 258 of them. Yes, the larger proportion came from the race wins of Vettel but those points are every bit as valuable as any others and the combined score is the one that won the constructors. Webber missed out on the Drivers Championship because he didn’t accumilate the wins with his average position two places behind his team-mate. His position in the championship reflects this accordingly.

“It’s very difficult going up against a driver of Sebastian’s calibre, being matched and measured against somebody of his standard,”– Christian Horner, Team Principle, Red Bull, on the critics

The 2010 season, was far more favourable for Webber, which is why many have retaliated to his 2011 campaign with harsh criticism. The last race in 2010, at Abu Dhabi, crowned Vettel as World Champion, outscoring Webber at 256 to 242 but Webber had throughout the season been consistently above his team-mate and had led the table on more than one occasion.

He is playing second fiddle at the moment and this is mainly due his own performance with the average time gap between their qualifying position being ten times more than the year before at 0.517 seconds. The tag of Vettel’s wing man is clearly not a title he appears to embrace and looking a little deeper we can see why.

With the re-introduction of a the ‘Marmite’ system that is KERS system, this left less weight ballast to manoeuvre and virtually no gain for him. Webber is engaged in a constant battle with his own body, his height and weight are already a black marker against him, couple that with the admittance at a recurring issue with starts and inexplicable lack of race pace against his team-mate and the problems become evident as to why 2011 displayed such a contrast between the two team mates. Towards the latter part of the season, a steady improvement can be seen as the hours of extra work and reignited passion begins to come to fruition.

For all the criticism Red Bull have received over the team orders issue, they stuck to their guns and when the boot was on the other foot they gave Webber the green light to put his foot on it. That is something which even I didn’t think they would honour.

Perhaps it was only because The Drivers Championship and Constructors was safely sat in their ever-expanding trophy cabinet. Maybe they wanted to manoeuvre Mark as high up the point total as possible. Or maybe it was because they genuinely will not favour one driver over another when the playing field is even, we will find out when the season commences.

The 2011 season was a learning curve for Webber, a lesson which culminated into a tantalising victory in Brazil where he was awarded that glorious number one for the hard work and tribulations. Granted, he can no longer afford many more of those but I think it will ultimately prove to be the best thing to happen to his career. It might be the catalyst to turning round his fortunes and becoming a force to be reckoned with in 2012.

“He has gone away and trained hard through the winter and his enthusiasm has rejuvenated and I think 2012 could be a very strong year for Mark.”

"I think Mark will be the guy who will threaten him (Vettel) if anybody" The F1 chief executive Bernie Ecclestone was quoted as saying when asked his thoughts on Webber by The Australian Newspaper.

“The last time I spoke to him about it, he was really motivated”- Bernie Ecclestone

Mark has grit and he has determination. After months of criticism and doubt, he chalked off the final race calendar with a win. Will fortune favor him in 2012? I think so. And if not, all rumblings from the Red Bull camp indicate the race pace which has eluded him for much of 2011 has finally been unearthed.