Battle Of The Brits

Mclaren are undoubtedly not only one of the most successful formula one constructors in Formula One history but also one of the most popular. They were founded by New Zealander Bruce Mclaren in 1963.Then known as Bruce Mclaren Racing Limited made their debut three years later in 1966 at the Monaco Grand Prix with their first race win in 1968 in the Mclaren-ford piloted by Bruce. Since then they have become winners of 8 Constructors championships and 12 Driver Championships off the back off 164 victories and 436 podiums.

The team has housed many legendary drivers including Ayrton Senna, Alain Prost, Mika Hakkinen and Fernando Alonso. Lewis Hamilton, progressing through the ranks at Mclaren for years delivered them a much needed Driver’s Championship in 08 and in 2010 fellow world champion and Britain Jenson Button joined the team to partner Hamilton and provide one of the most popular line ups in recent years.

Button started the season with clear intention of shaking the perception that he was intruding on Lewis’ team by winning two out of the first four races of the season and achieving several podiums. Hamilton retaliated with three wins of his own and nine podiums, finishing the year comfortably ahead of Button in the Driver’s Championship, 26 points ahead and 4th overall with Button holding the 5th spot.

2011 brought Button back into the fight to capitalise on Lewis’ poor season. Armed with a flurry of impressive and consistent drives, displaying smoother race pace and tyre management. They both attained three victories a piece but Button finished the season with 12 podiums to Hamilton’s six and was the only other driver on the grid who came remotely within an inch to seriously launching a challenge to eventual winner Sebastian Vettel. He finished 2nd overall just above The Champions team mate Mark Webber. Hamilton, hurt substantially by on track scraps finished 5th with 227.

Jenson appeared relaxed with the team and his progress whilst Lewis appeared somewhat agitated and cut a restless figure in the paddock. With the equilibrium disturbed it appeared on the surface that the more Hamilton faltered the more Jenson tasted success. The balance of power shifted substantially and took everyone by surprise. The critics scalding Button for his decision to move to the team held their tongues and turned their attention the Hamilton, who seemed equally surprised to be out performed and at a loss to explain his pace.

After the season had drawn to a close and both were able to reflect, Hamilton found himself to be heavily critised and many suggested he take some tips from his team mate and adopte a more mature attitude. As Jenson basked in the warmth of his family and blistering return to form, Lewis was seen alone without the familiar loving faces which have supported him throughout his previous seasons in Formula One.

After somewhat of a thrashing by various pundits, peers and tabloids, Lewis opted to spend the winter reassessing and refocusing. The time has been well spent as we find ourselves on the verge of Silverstone with a far calmer and collected Hamilton sat in 4th place already with one of the record breaking wins to his name and a steady flow of race finishes and points.  He is bringing the car home and collecting handfuls of points as he goes. Far less of the reckless maneuvers and overtakes displayed previously and seemingly every second of drive is controlled and thought applied. An on-track battle with the Williams of Pastor Maldonado gave Hamilton his only poor race thus far and although understandably frustrated at being involved in a tussle which dashed his podiums hopes he appeared far more reserved than previously seen.

Turning Over A New Leaf

2012 saw Button continue where he left off with a  storming win in Australia and a second place in the first three races. His early race pace established himself as an early title contender, for many, a favorite. However  the following five races yielded him a mere six points. 2011 showed the critics that Hamilton could be challenged close to home and within the team he had made his own with Jenson out performing him repeatedly. Perhaps it gave Lewis the reality check he needed to find his way back, with Jenson left scratching his head at the loss of pace, Hamilton now seems to be enjoying the role reversal.

If we factor out potential victory costing mistakes such as the pit stop issues seen in Bahrain and a refueling mistake in Spain, it is no stretch to say that Hamilton could already be on his second victory by this point in the season. Let's not forget that Button has experienced similar issues in China however. The team issues have collectively hurt both drivers and leaves them 39 points adrift behind Red Bull. 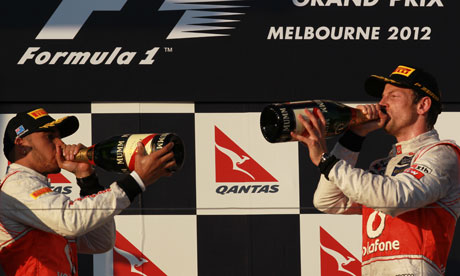 Prost and Senna gave the sport the highest number of double race wins of any driver pairing with 14 wins between them over two seasons (88/89) if Hamilton and Jenson can find a stable balance of power is it possible they could challenge this record? A strong friendship off the track helps to iron out any bubbling issues between the pair, If the team and the drivers can once again unite they will certainly be more than a threat to the Constructors, they will be serious contenders, once again a force to be reckoned with.

The question is can they do it in time?