Australia showed us a resurgent and determined Kimi sailing to victory in his Lotus, this week we saw him boxed in 7th struggling with the pace. 2013 is already dishing up the much needed unpredictability promised by Pirelli as we witnessed a Malaysian grand prix dictated by strategy. Fernando Alonso sustained some damage to his front wing following contact with Vettel and gambled on staying out. A gamble which on this occasion didn’t pay dividend when he run off the track on lap one dueling with Mark Webber.

The gritty aussie pushed his way from 5th to 2nd and opted not to pit to a medium dry tyre instead allowing Seb to take that risk. When he did pit it was to the harder compound after building up a decent lead. He left the pits ahead of his team mate. A memory lapse from Hamilton, which saw him trying to pit in the Maclaren garage cost him potentially the lead. His pace remained with a confident and challenging third with Rosberg hot on his tails.

Red Bulls strategy was to avoid a tyre burnout on both cars and instead ordered both drivers to manage and maintain a front against the charging Mercedes. Its not a strategy that sat well with Sebastian who issued a radio message "Mark is too slow, get him out of the way” Webber responded by increasing the gap. Under pressure from Hamilton until he opted for a pit stop. He was replaced by Nico in a tag team from the Mercedes. A flurry of pit stops ensued with Webber emerging the victor.

The in fighting between both teams resulted in Rosberg being denied a pass on Hamilton by Ross brawn and a dangerously close wheel to wheel racing with Webber and Vettel. Vettel recaptured his lead but at the cost of his tyres. Forced to nurture them for the remaining laps he had managed to build up enough of a lead to cross the line in first.

Rosberg, after his pleas over the radio fell on deaf ears accepted the team’s position but offered a stark warning to them to "remember this one"

"I don't feel spectacular sitting here. Obviously I think Nico deserved to be where I am right now but obviously the team thought that, I guess, with the position in the Championship perhaps it was logical to stay in the positions we were in"  - Lewis Hamilton

The frosty reception Seb received from Mark and Adrian Newey emerged and over shadowed the race result. The podium took the award for the unhappiest podium in recent history. Lewis Hamilton looked solemn and almost embarrassed, lamenting the sacrifice of his team mate whilst actively removing himself from being at any point in between the two sparring red bulls. Marks stark post race podium revealed that multi 21 means don’t over take your team mate and he did so once the engine had been tuned down. Leaving Webber unable to recover even once the engine had been turned back up. This has opened old wounds and Christian Horner looks like a man on the edge. Much more is certainly in store if he is not in a straight jacket and Seb not in the ground by China. Tensions at both Red Bull and Mercedes will be running high but for the latter many fear it is simply too much for the team to recover. The damage done to the team, if unrepairable, could cost Red Bull the constructors and leaves a dark cloud cast over the future of the Aussie. 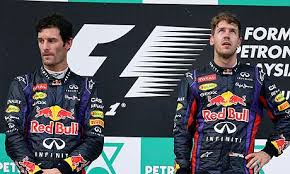 "I put myself above that decision today. I didn't mean to. I can only say sorry, apologise."

"After the last stop the team told me the race was over and we turned the engines down and go to the end. The team made their decision. Seb made his own decision and he will have protection as usual." - Mark Webber

However bad a day at the office it was for Red Bull, it was day at in the park compared to Force India with both cars retiring due to issues with the wheel nuts. Meanwhile, though displaying a distinct improvement of pace since Austraila, the race left a bittersweet taste down at Maclaren. Perez brought the car home to finish 9th whilst the decision to retire Jensen Buttons car left him feeling disappointed. He had shown good pace with one less pit stop already against the front runners having been inexplicably thrown into the mix until an incorrectly fitted tyre left him stranded.

With even the champagne sippers wishing to put this grand prix behind them and the issues which dogged it to bed, the repercussions will undoubtedly echo across the paddock and carry through to China. 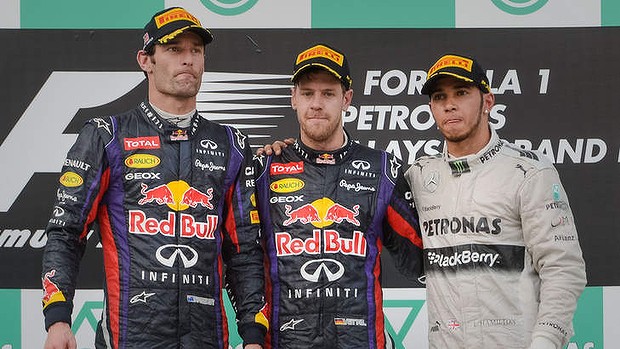 The results propel Vettel into the lead at this early stage in the fight for the drivers' title with 40 points to Raikkonen's 31, Webber's 26, Hamilton's 25 and Massa's 22. Red Bull lead the constructors' championship, followed by Lotus and Ferrari . Mercedes sit in fourth with their best finish since their return to the sport with Michael Schumacher at the wheel.